This page includes: Important comments, and a list of future and past events with selected photos and results

We make more progress, sort of. The new Herd Book System went live on the 22nd April but there are some problems. You will need a new password. Contact Doug Stapleton 0408681610 or [email protected] to set a  one. List Animal and List Members searches now work properly Add Animals and Transfers also work but there are issues with litter size and DOB’s but we are getting there. Please don’t save anything at present and  Don’t Panic. DS

How to work this site. Now you can pick which page you wish but new stuff starts here with NEWS. Latest news is on top. Most of the pages however are static with routine information for the public and members who need forms etc. Much of the information is up to date but more will be added.  Did I complain about the editor program? “All else fails, read the instructions ” Right? Well, talk about a tidal wave. Everything has already been thought about and made available. BUT where to start! DS

Here begins a rework of the mohair site. This will be something of a steep learning exercise. Not only am I overseeing the redevelopment of the Herd Book, but also learning how to edit pages you see and supplying some “content”. Now, content is the real purpose of a web site. Its not easy because you have to make real comment and supply graphic material including photos.

Content can be on the page or it can be stored with a link, or the link can be to another web site or published material. Working on a site rapidly becomes complicated. Please let me know if you have a comment or even a paper which might be published here. Send articles and comments to [email protected] . Thank you for your patients. DS

The follow up meeting on 22nd discussed the 2021 NATS and the development of a early warning sheet to coordinate planning and exhibitor’s efforts.

The NSW Division ran a successful meeting on Friday morning (15th May). While not all members of the Executive could attend much progress was made with communication within the state. The NATS report will be dealt with next week but it seems that the big event essentially broke even and the general impression was that the event was hugely successful.

I was asked at NATS why the List of judges only contained NSW people. Well – it’s a NSW list. My answer was followed by another question – Why isn’t there a National list? That required a more complex answer. First, the NSW list is the result of a long-standing development policy started by Frank Wroe using Judging schools, Associate Judges and finally, after an apprenticeship appointment as a Full judges. Second, the development of a Judging Guidelines document in 2002. This document followed consultation with other Divisions. Third The approval of the then National Board (which was obtained though there was some disagreement specifically from Victoria which wanted to use their own guidelines). 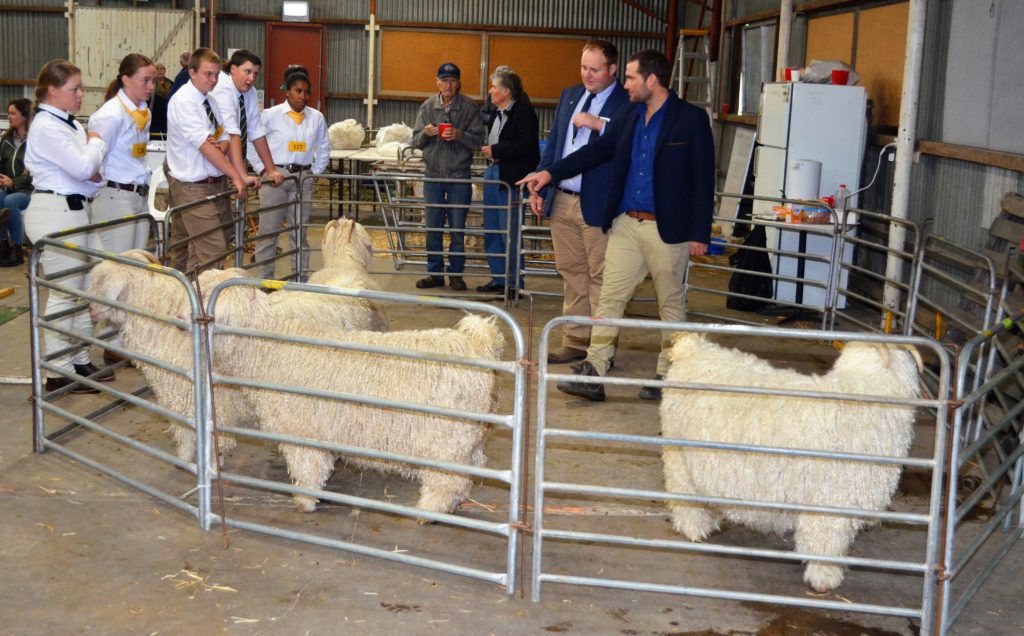 Photo above. Here is the judge explaining to his associate judge while judging the NATS.

This led to a third question of whether the National Board should make appointments to a National Judging panel. From my experience it was decided against doing so, or rather not to pursue the idea. The reason can only be guessed at. Probably because there were too many more important issues at the time but also the danger of perceived nepotism.

In any event, there is only the NSW Division’s list because NSW is the only Division with an appointment process. So that is where the situation stands.

Recently I was asked by the NSW Division to update the 2002 document. This has been done and the draft document was sent to all Associate and full NSW Judges. A copy of the updated document will be referenced here if I can work out how to do a link to a PDF file.

Windows 10 – all things to all people?

Not really Angoras but still central to our existence. I thought I might put a few comments down to see if it applies to everyone. I am continually frustrated with the Windows 10 operating system. Now it may be because I want to do things my way, instead of the Microsoft way. But still; much of computing in the past has claimed a good deal of intuitive method. Not anymore. Windows (or Microsoft) wants to do it it’s way and tries to help – well the difficulty is that “help” is not intuitive.

Specifically, the file system is confused by the One Drive system. I know it’s meant to make computing available on multiple machines including smart phones which seem to be taking over being THE mobile platform but here is the point – using Word, for instance, and when you want to save your work, it asks you for a file name (OK) but then it says “Don’t worry, we’ll put it somewhere”. For those of us who write a lot, how do you find where it puts stuff?

And, the other example. Where does it put photos? You don’t need to know if you use the Windows photo system which puts camera downloads into albums and One Drive will even pick out interesting groups of photos for a slide show (without asking until it wants to show you what its chosen). “Go away!”, all I want is access to my camera files so I can copy specific photos into Word documents. So, where are they????

Now I have plenty of other issues and you might have them as well. The thing is that Microsoft has built a multi-language operating system which does everything. You just have to ride along and now we have to pay for Office 360 (every year) and it automatically up-dates. Some have to pay for One Drive and of course Windows 10 also updates, not uncommonly when you just want to use the computer in a hurry – but I digress. What I really want is Widows 7 and the old Office programs.

End of the drought??

March and April have seen unprecedented rain. This is not normal for the Central West which usually suffers a mini drought in these months of the year. One could ask “What’s going on, but thank you anyway?” Who knows. Are we lucky or is this further example of disturbed climate?

In any event the early rains have changed the picture for the winter. IT’S GREEN! And the oats have been planted, to be followed by the canola and (later by) the wheat. It’s hoped that the rains continue into the spring so we can see hay and grain harvests. Of course, global warming has not gone away and whatever the long-term effects of that turn out to be, we will have to see over a longer time frame.

A reminder that the B2020 auction will be held on the 11th September. The closing date for this sale is the 29th May. However, if you have a problem making this closing date please contact the AMMO office. A $4/kg advance payment is available if requested when your mohair is received at the Narrandera warehouse.

On that fateful weekend in March (13th-15th) when big decisions were made in Canberra (the lock-down and the financial support for the country) the NSW Division once again held the National Angora Show and sale – NATS. 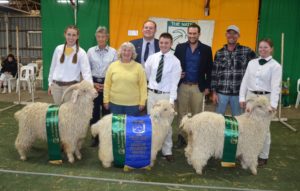 AMMO A2020 sale (written immediately after the sale)

Independent report on the AMMO A2020 sale held on Friday 6th March.

Bidding was energetic with prices reported to be similar to the South African sale held earlier in the week. A complete clearance was achieved after negotiations on 7 lots.

Some concern is expressed at the size of the offering given that no sale was held in November 2019. Prices for mohair would seem conducive to increased production but it is recognised that drought and high meat prices present potential growers with impediments to increasing stock numbers. Not to mention the time required to grow numbers by normal reproductive means.

Stud animals were Judged Wednesday the 4th commencing at 9 am with the adult Doe classes over 38 mth and older through to the under 14 mth doe classes -all Doe and Buck classes were well represented by 5 studs on the day being Lynndon Grove & Amarula  Angora Goat Studs, Ansebury Hill , Cedar Grange and Aanaarden Park .

Click for George Hope’s comments on the South African industry 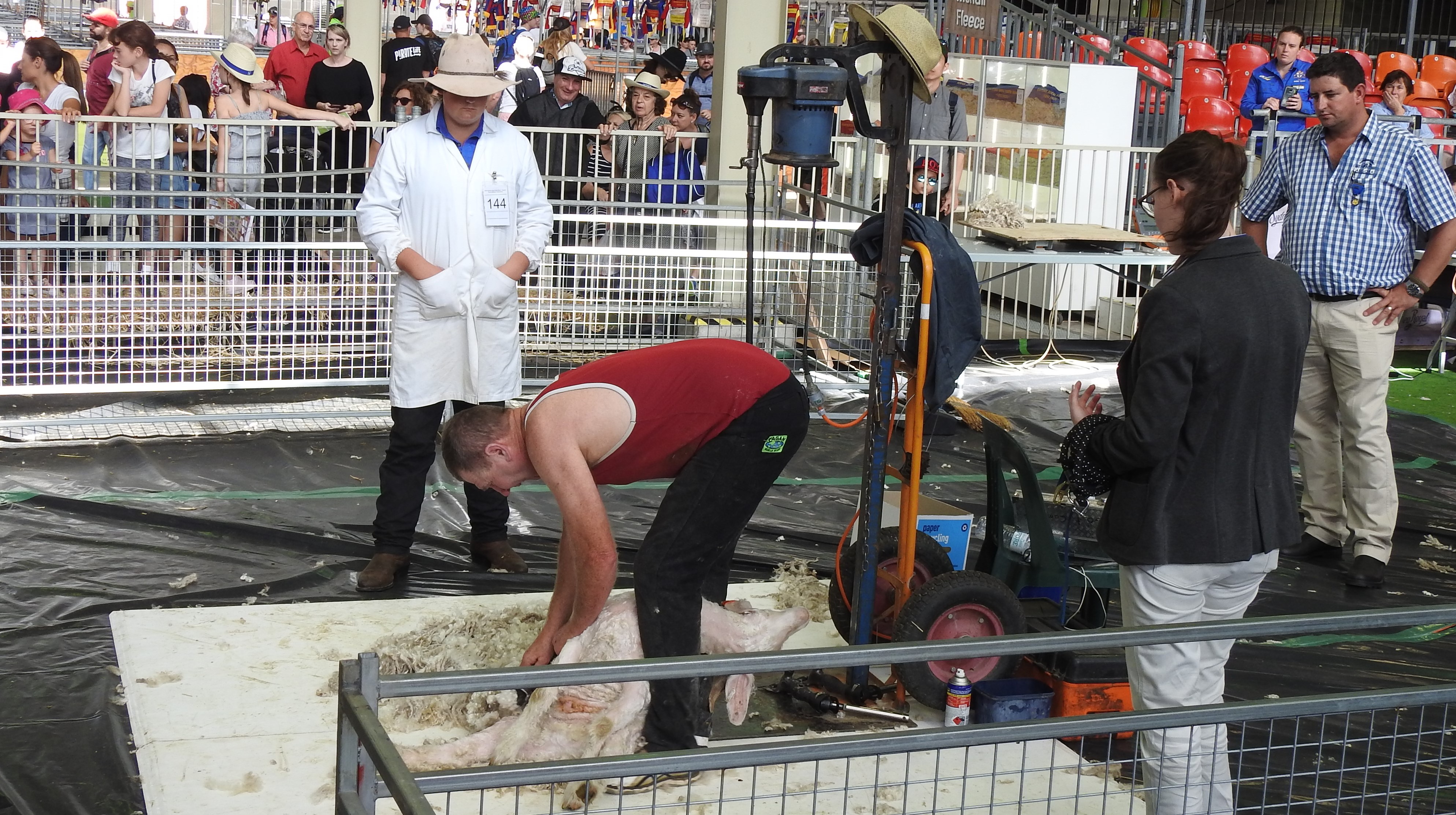 Cullbookie has another big result

Debbie Scattergood receiving the big “lump of silver” – the Ron Smith Perpetual Trophy for best in show. (The trophy is a cast silver sculpture made in the USA depicting American Mountain Goats. The trophy rotates annually through the 3 goat sections at the Royal Easter Show.)

Now here is some interesting reading. Click the link below to see the guidelines developed for South Africa. This is a very detailed document and it shows how serious the South African industry takes the development of a public image and an industry practice. 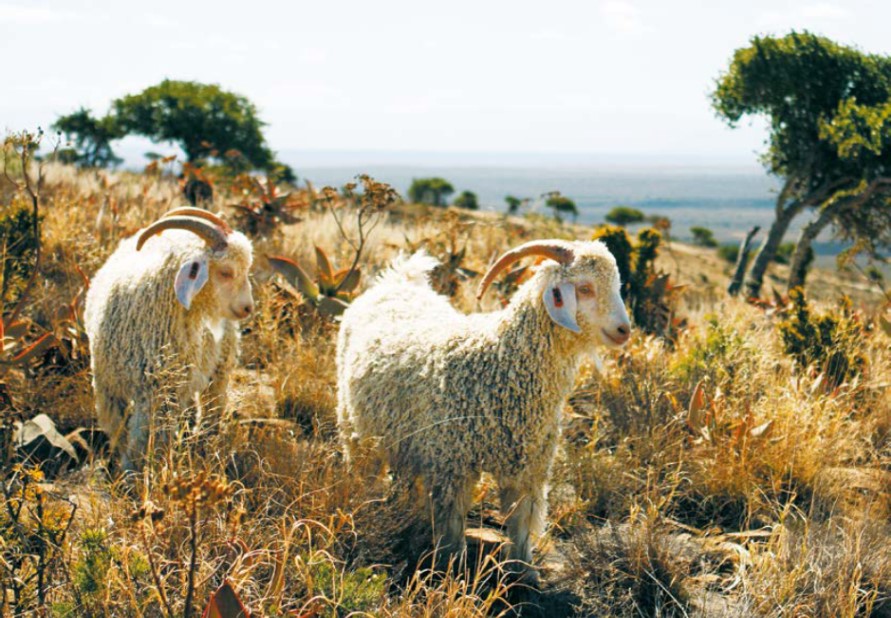